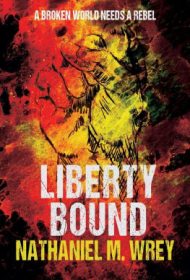 Set far into Earth’s future, Nathaniel M. Wrey’s captivating science-fiction novel, Liberty Bound, describes the political awakening of protagonist Finbarl, a loyal, committed member of his city’s police and security forces, as he comes to realize the corrupt nature of the ruling class he has been raised to obey and respect.

The exciting and wonderfully intricate plot reveals that several thousand years into the future, mankind has been reduced to a lone, heavily fortified city, Athenia, of 10,000 or so surrounded by a desolate wasteland inhabited by Ferrals, a race of mute, savage, devolved humans who kill and eat anyone unlucky enough to be caught outside the town’s walls.

However, readers, along with Finbarl, soon discover that this world’s real villains are Athenia’s rulers, who have established brutal discipline, rigid bureaucratic control and propaganda, and a hierarchy of privilege and reward for those who obey and swift, merciless punishment for anyone who questions the ruling families’ wisdom and authority. Additionally, the bosses keep the entire city addicted to a drug, Jumblar, that renders them quiet, pliant and more worried about their next dose than about rebelling against their leaders

Finbarl’s growing awareness of the depth of the leaders’ corruption reaches a climax about halfway through the book when he has been exiled into the wilderness and has found his long-thought-dead mother, who instructs him in some basic notions of freedom and responsibility: “…until mankind decides to come down from the metaphorical tree for a second time, then civilisation has no chance to flourish again. Liberty remains bound. It’s a new, better civilisation you have to build, with the lessons and skills from the past!”

Although the prose gets a bit heavy and preachy sometimes (think George Orwell rewrites Wes Craven’s classic 1977 cannibal thriller, The Hills Have Eyes), Liberty Bound is an exciting, thoughtful read, studded with well-realized, well-written action set-pieces and interesting, complicated characters who sometimes surprise readers by growing and learning from their experiences.