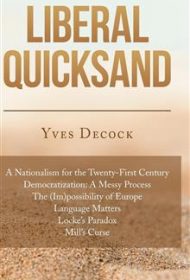 Liberal Quicksand aims to debunk a “fairy tale” about modern political history: the belief, in the words of the author, that “the peaceful character of the current Europe is the result of the conversion of wise politicians who turned their back on nationalism.” Instead, Yves Decock argues that nationalism—defined by most scholars as the belief in the nation-state as the motivating unit of, and force behind, all political action—was the “driving force” behind the evolution of Modern Europe.

Decock supports his view with several chapters of rather boilerplate history that all too often strays from a defense of his thesis and offers little more than a straight narrative history of Europe’s nations. These chapters are generally weakly sourced, with the author depending on one or two secondary books as the basis of his summary. The exception is a rather interesting chapter on the use of language as a nationalization tool and as the primary factor leading to the assignment of a national identity.

In his thesis, Decock has a point. Clearly the balkanization of nations since WWII, both in Europe and the Middle East, and the creating of new nations based on a shared identity of language, religion, and political heritage (think of the disappearance of the former Yugoslavia, the creation of new ethnically secure states in its wake, and the resulting Bosnia/Croatia bloodbath—a topic Decock touches upon) is, if not the key political development of our age, surely one of the most influential. But so too is the rise of what scholars call “statelessness”—the genesis of nation-state substitutes such as al-Qaida and ISIS which have stepped into the vacuum of the dissolution of 20th-century states using terror as a tactic, and violence as an outcome. Decock does not adequately address this, perhaps because it challenges his thesis on a broad scale.

Reading Liberal Quicksand is a challenge. The book is riddled with spelling and typographical errors. With only one point of view offered, it is more polemic than academic argument and might serve as a starting point for the study of nationalization in modern politics, but should not be the ending point. For the next step, readers are advised  to consult Benedict Anderson’s respected title: Imagined Communities: Reflections on the Origins and Spread of Nationalism (1983).