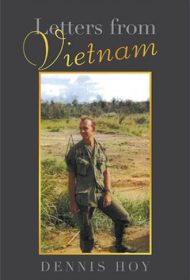 In Letters from Vietnam, Dennis Hoy describes his life as a U.S. infantryman during the Vietnam War.

Twenty-four-year-old Hoy married Beth, his college girlfriend at Eastern New Mexico University, two months before he left for basic training after being drafted. Once separated, the newlyweds wrote to each other frequently. Hoy bases his memoir on these letters and on others written to his parents.

From his arrival in Vietnam in February 1967 to his departure a year later, Hoy chronicles his daily life. He reports on combat as well as the mundane aspects of a soldier’s life. Surprisingly, Hoy writes “there was a lot of humor in the army and in the war,” a point he drives home by sharing anecdotes about occasional funny moments occurring even when under fire, such as when another soldier couldn’t see the approaching enemy until told he was wearing sunglasses at night or when a patrol leader advised the corps to bark like a dog to scare away a panther.

Awarded the Silver Star for valor, he was a responsible yet pragmatic service member who unapologetically took a few extra days of leave prior to his scheduled flight home to ensure he would remain alive. Luck played a major factor in terms of survival, as he notes drily.

Hoy writes in a straightforward manner, occasionally straying from his chronological recounting to provide relevant background information. He doesn’t dwell on the more gruesome aspects or reveal his political leanings. Only at the end does he share his views about the war, noting that it was without a clear purpose or sufficient resources to achieve victory.

Hoy’s memoir is informative and engrossing. Had excerpts of the letters themselves been incorporated, they might have provided an additional emotional punch. Although some of Hoy’s recollections seem attenuated, they nevertheless contribute to the sincerity that permeates his story.

In all, this is an interesting, comprehensive account of an American soldier’s experience in the Vietnam War.