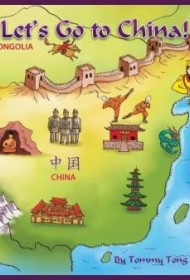 The seventh book in Tommy Tong’s “China for Children” series, Let’s Go to China! is a colorfully illustrated collection of factoids about the world’s fourth largest country. The picture book puts China in a world context and highlights curiosities about the country, past and present.

Tong, who describes himself as an “advocate for East/West understanding for over 30 years,” presents many facts chosen to wow children with the large scale of things Chinese, from the size of cities to the length of China’s Great Wall. (In fact, after noting that “China has most of the biggest cities in the world,” he interjects a “Wow!”)

The author overuses the word “biggest” and employs it loosely. When he calls Shanghai “one of the biggest cities in the world” and “the biggest seaport in the world,” one wonders if he means in terms of population, geographic size or both. More care in delivering facts would be a plus – even a necessity, considering the book’s mission. A thorough copy edit would also clean up some single words that the author unnecessarily breaks or hyphenates, such as “bed time” and “night time” and “after-life.”

Tong is at his best when he provides details likely to stir a sense of wonder in children. For instance, the straightforward statements, “China has more trains and subways than any other country in the world” and “Over 100 million travel by train to go to work and visit other cities every day” are made far more interesting because he adds, “During the holidays, there are as many people riding on trains in China as there are living in all of North America.”

Sometimes, Tong’s content selection seems a little random. A whole page picturing hot dogs, pizza and other Western foods seems an unfortunate use of space that could otherwise be devoted to Chinese items. But despite some flaws, Let’s Go to China! retains appeal as a grab-bag of fun facts for children.