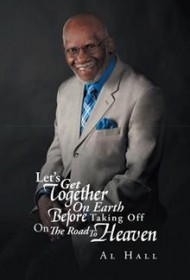 The poet-speaker in Al Hall’s Let’s Get Together on Earth is a Baptist deacon writing with his own, and similar, religious congregations in mind.

Hall’s narrow audience is epitomized by the poem “Getting Ready for Baptist Men’s Day,” which begins: “Baptist’s Men’s Day is coming soon./It’s just a few weeks away./We invite you to come and join us/As we worship on that special day.”

Many poems in this collection, particularly in the second half, are occasion poems written with very specific people and events in mind. For instance, the entire third section contains poems written “for Special Men’s Ministry activities […] including annual men’s retreats and the father-and-son banquets.” Other poems commemorate the birthdays, anniversaries, and passings of reverends and worshippers in this poet’s religious community. Such poems focus so particularly on the occasions in question that they serve more as artifacts for a church memory book than as crafted work that elevates personal experience to a more universal level.

For instance, “Celebrating in the Name of the Lord” commemorates the installation of a new pastor at Alfred Street Baptist Church: “Pastor Wesley, you are now installed to lead this flock./ Dr. Peterson passed the baton to you./God blessed you by bringing you to Alexandria./Keep trusting and He will guide you through.”

Hall’s most promising moments are when he turns his gaze to the larger culture, considering the presidency of Barak Obama and the murder of Trayvon Martin. The writing is still simplistic and lacking in imagery, but the poetic impulse is more socially relevant here than elsewhere.

The overall ethos of Let’s Get Together is Christian self-help and inspirational verse. The collection is likely to appeal to Hall’s friends, family, and fellow congregants but is unlikely to satisfy general readers of contemporary poetry.