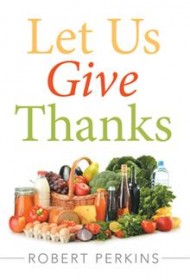 The poems in Let Us Give Thanks aim broadly to inspire readers through light religious verse centered on gratitude. They proffer appreciation for an enormous range of entities and ideas, from nursing homes, wheelchairs, and new glasses to art, memories, and time.

Most of the poems are titled “Let Us Give Thanks for…,” followed by the item of appreciation (such as: “Our Home,” “Beautiful Flowers,” “Gravity”) They speak to the author’s joy and wonder at everyday life.

That sentiment might appeal to some, but the poetry’s craft suffers several flaws. The collection is characterized by monotony of tone and content.  Each poem features a static pattern of four quatrains, most adhering to an aabb rhyme scheme. Readers are likely to weary of the format, and the content can seem redundant. For instance, an early poem includes, “Our bodies are beautiful works of art/ Thank You, Lord, from the depths of our hearts.”  A middle poem concludes, “Jesus, You healed the body and heart/ Which is where true healing starts.”  A much later poem muses, “We love one another from the heart/ The very best place for love to start.”

Finally, while most of the poems reflect a gentleness of spirit, readers may be troubled by a few moments: i.e. occasional gender stereotypes (referring to a groom’s “partying days,” or assuming that all women want to give birth) or the speaker insensitively advising the homeless that “a better home is awaiting us someday/ So why not thank God instead of complain?”)

The issues mentioned will likely limit the appeal of the book. Those who favor formulaic Christian verse might find satisfactions here, but readers used to sophisticated, nuanced fare will want to look elsewhere.