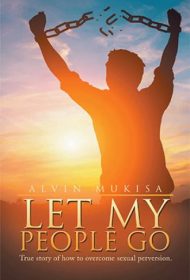 Alvin Mukisa describes his work as “a roadmap to freedom” for those suffering from sexual perversion.

Mukisa was ordained and ministering for nearly 15 years while engaging in homosexual acts, which he labels a “perversion.” Soon, his life began to feel untenable. He was “overwhelmed by my [gay] brother’s agony as HIV/AIDS devoured his body” and notes that his ex-wife left him, taking away his young son, “due to my gay lifestyle.”

“My burden was heavy,” he writes— so heavy that he contemplated suicide but feared “where I would spend eternity.” Ultimately, “The only option I was left with was to cry out to God for help.” Here, he urges others fighting sexual perversions to do the same.

Mukisa, who notes that he was delivered from his homosexual urges, mostly focuses on homosexuality (although he recognizes other forms of sexual perversion). He lists the ways such perversion is sown, including through lineage (if it’s been in your family); being enticed into sexual acts with money; being molested as a minor; even through music, which imparts “sexual perversion from the person singing to the people listening to their music.”

Each chapter offers instructions, gained insights, revelations supported with scriptural references (King James Version) and a prayer that can be spoken by readers.

The author’s honesty and genuineness is commendable, as is his willingness to address sexual issues within the leadership of churches and ministries.

However, the idea that homosexuality is a perversion is highly controversial—as is the thought that homosexuals choose this orientation and, thus, can choose to change with God’s help. Many cultures now deem homosexuality natural and acceptable. Therefore, a large swath of readers will be offended by this work.

Still, the Bible states explicitly that homosexuality is unacceptable, and the book holds appeal for those who read the Bible literally. For such an audience, Mukisa’s story offers hope and reassurance that they aren’t alone in their struggles.

Also available in hardcover and eBook.