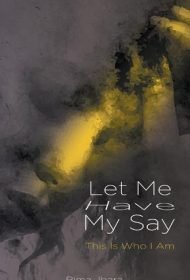 In Let Me Have My Say: This is Who I Am, author Rima Jbara tells the story of a sculptor struggling to balance work and family with the career she truly wants.

Jbara makes bold choices in organizing the novel. Unfortunately, they don’t always pay off, and the novel presents many challenges to comprehension.

Virtually the entire book is made up of short snippets of dialogue, with no indication of who is speaking. The main character doesn’t have a name, and chapters sometimes end with a bit of verse or a brief speech directed at the reader, or to “Pain,” “Doubt,” “Innocence,” or something similar. Readers can deduce that this character doesn’t like her regular job and that her family and romantic life suffer, although she does enjoy making sculptures and showing them, to mixed critical response. But there’s no plot to speak of.

The drama surrounding the story is pitched very high, and the writing can be somewhat breathless, and sometimes puzzling, while making that point, as in: “Highlighting my eternal turbulence that the artistically minded artist that I am often facing intense yet a personal string of comments that are memorable, not because they help me in finding inspiration but because they gave me a series of nervous breakdowns.” Or: “That would be perfection which does not exist except in the eyes of those who believe in misconception.” Because this character’s situation is not uncommon, the dramatic tone leaves readers feeling she’s merely immature.

Jbara deserves credit for upending traditional novel forms in pursuit of a more emotional story, but readers may feel adrift without at least a little physical or sensory detail to ground things. Let Me Have My Say has a lot of heart, but that shortage of detail makes it extremely hard to follow.