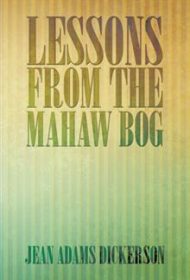 Sometimes a life story gains its power from progress made slowly over the long haul. Such is the case with the life of Annie B. Adams, a black woman who grew up in the Jim Crow south. Although she eventually became an educator, it’s the stories of how hard she had to work to simply attend school that stand out in this slim biography, Lessons from the Mahaw Bog.

Author Jean Adams Dickerson is a relative of Adams (although that information unfortunately isn’t divulged until page 14). An afterword by Adams’ granddaughter, Cynara Robinson, describes interviewing her about these experiences for a graduate thesis, however it’s not clear whether Dickerson used that material for this book.

Short chapters describe young Annie’s long walks to school after mornings full of chores, then her moving to live with various families to attend school; the nearest high schools that accepted black students were 20 and 25 miles away, hence the need to move in order to learn. A few sidebars labeled “Historical Point” provide some context for the conditions of the time; for example, the reverence with which black teachers were regarded in their communities, which explains in part why education was so highly valued.

After she became a teacher, Adams organized a girls’ basketball team for her sixth grade class in 1952, ages before Title IX made equal access to sports a right. She continued her own education while she worked, earning a master’s degree over five years of busy evenings and weekends. Some of her earliest classes were taught in the shade of nearby Mahaw trees (whose fruit was a regional delicacy) to keep out of the midday heat.

Lessons From the Mahaw Bog is a short book. A few spelling, grammar and punctuation errors don’t detract from the clean, direct writing. It’s a compelling story of overcoming odds, not through bluster but dogged persistence and the focus on a single goal.