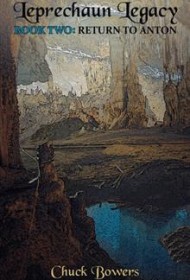 The second book in a series for young adults, Leprechaun Legacy: Return to Anton continues the story of 16-year-old Alex McNaire and his connection to leprechauns, this time focusing on his desire to see his friends in the kingdom of Anton again, and to understand why he woke up with gold coins after the storm that concluded the first book in this series.

Return to Anton begins after a terrible storm has knocked Alex unconscious, and he remains in a coma for the first quarter of the book. During this time, the narrative mainly follows his worried grandfather. When Alex finally wakes up, he and his grandfather learn that the gold found with him was a gift for turning the war in the leprechauns’ favor during book one.

Alex eventually convinces his grandfather to cover for him while he visits his leprechaun friends in Anton for a few weeks. Once there, he realizes he may love the leprechaun princess, although he returns to his own world as planned.

This book is not for readers new to the series, as characters and places from the prior book are introduced without explanation, and the circumstances around the war and how Alex initially came to meet the leprechauns are never explained. The narrative occasionally suggests Alex might be in danger due to the war, but nothing comes of this foreshadowing. As a result, there is no conflict to drive Alex’s actions or the story, and there’s no sense of accomplishment at the end of the book.

More of an extended epilogue than a novel in its own right, Return to Anton may appeal to readers of the first book who wanted a happier ending and more complete conclusion. Others will find themselves wishing for more context to help them make sense of the story.