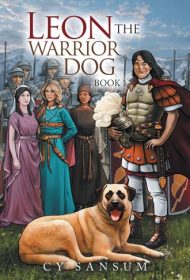 Beat, a shepherd, and his dog Leon join the Roman army and attempt to fight off a Goth invasion in this short historical novel set in 313 A.D.

When a soldier asks Beat to join the army, Beat challenges the soldier to attack him with his sword. If the soldier can’t hit him, Beat says he will join the army, but as a Centurion (despite his lack of experience), and insists that his dog Leon be allowed to accompany him. With Leon, a massive Anatolian shepherd dog, defending him, Beat wins the challenge and begins life as a Roman soldier.

In the adventures that follow, Beat proves himself an able leader and military strategist, catching the eye of an Alemanni princess and rising through the army ranks at a meteoric pace.

Beat is a likeable character, good humored and honest with his men. Yet although his happy-go-lucky style has its charm, his first-person narrative is jarringly modern. Beat talks about how he could “blag his way” out of trouble, claims to think “outside the box,” and addresses readers directly; for example, explaining, “we were marching towards the city of Mediolanum (in the future, you will know it as the city of Milan).”

His success in the Roman army is far-fetched and not believable. While events unfurl at a fast pace, the lack of realism means that the story has no emotional weight. Additionally, descriptions are minimal, as in: “it was like a scene from Roman battles all over the Empire.” Toward the end of Beat’s adventures, several new characters are introduced, and the book concludes abruptly, presumably with a sequel to follow.

The story has significant editing issues. Words are incorrectly capitalized; dialogue isn’t properly punctuated; there are inconsistencies in tense and grammatical errors (for example, this bit of prose ends in mid-thought, without a period: “Aureolus looked totally confused. I then”).

In sum, the narrative requires revision to make this a successful reading experience.