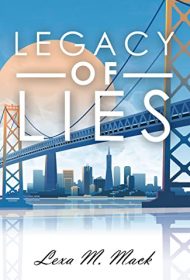 The Prologue opens on July 2 with police arriving on the scene after the body of a woman identified as Grace is found murdered in her apartment.

The story, set in San Francisco, begins the previous April when strangers Grace and Kestrel submit DNA samples to learn more about their respective family backgrounds. Grace was adopted as an infant and has led a privileged life; Kestrel’s bohemian mother has always been reticent about her daughter’s lineage. The women learn they’re sisters and have a brother.

Grace is well-educated with a good job and a questionable boyfriend. Kestrel has several jobs, including work as a server in an exclusive private dining club and at a high-end senior facility. These jobs provide the opportunity to gather content for her blog, which focuses on the dirty laundry of the rich.

Among the wealthy Kestrel routinely encounters are Garrett “Gari” Graham, Jr., part of an elite, well-established San Francisco family, and his brother-in-law, George, a man desperate to be on equal societal footing with him. When Gari receives an email from someone claiming to be his sister based on DNA testing, he sends George to determine its truth. What ensues is a series of lies and George’s scheme to embezzle Gari, among other plans.

Numerous characters and their backstories provide too much prelude before the novel reaches the story’s heart, slowing momentum. However, the plot finally gains traction and moves rapidly when the embezzlement scheme appears. Additionally, Mack’s characters are interesting, credible, and easy to imagine. For example, Kestrel’s initial reluctance to go through with the DNA test is believable, as she knows the results could be gratifying—or disappointing.

Errors misnaming characters near the end are disconcerting. Nonetheless, mystery lovers will enjoy following the characters’ schemes while wondering if everything is really as it seems.