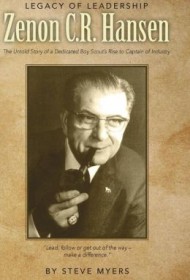 Even a colossus striding across America’s business, civic, philanthropic, social and educational landscapes can have feet of clay. That’s one of the surprising revelations in this biography of corporate high-flyer Zenon Hansen, a man widely regarded as an outstanding leader and role model.

Hansen, a trucking industry executive, is credited, among many other things, with hauling Mack Trucks back from the brink of oblivion. He led a life of achievement from a young age. Hansen’s parents divorced when he was three but he found a substitute “family” in the Boy Scouts, where he earned 81 merit badges when only 21 were required to become an Eagle Scout. He later served 16 years on Scouting’s national executive committee.

Despite winning a University of Iowa scholarship, he went straight to work; however, he eventually received eight honorary degrees, and his support for hundreds of organizations earned him countless honors, including the keys to 11 cities.

But Hansen’s life was also marked by difficult relationships. He married four times and was estranged from his only child, who eventually committed suicide by jumping in front of a commuter train in Chicago. “(Hansen) had a hard time showing warm emotion,” says one long-time friend. Another recalls that he “was idiosyncratic, bombastic, a pain in the ass… Not everyone loved him, but they respected him.”

At 60 pages, this is more of an extended outline of Hansen’s life than in-depth biography. Still, those who enjoy reading about larger-than-life characters will find much to appreciate here.