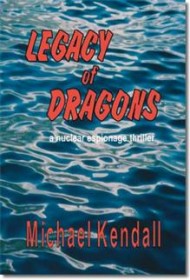 A sunken secret invites a plethora of spies, terrorists, nations and adversaries into a race against time to recover a potential global threat in this debut novel. Physicist, engineer, businessman and sailing master Michael Kendall brings all of his passions to play in his deeply complex, intricately plotted thriller.

Legacy of Dragons opens on an alternate version of America’s entry into nuclear conflict, as a bombing mission carrying a plutonium-equipped nuclear weapon dubbed “Thinman” (“Fatman” was the atomic bomb dropped on Nagasaki) disappears in the North Pacific circa 1945. The narrative then jumps to 1953, as Captain Gilbert Piltcher, Chinese operative Simon Carter, Lieutenant Philip Senden and scientist Tony Holmes face the consequences of sinking a freighter named Acacia Lady deep in the English Channel, with a secretive payload onboard. Finally, we leap forward to the present day as our protagonist Senden, now a doctor, arrives at a secret hospital run by the British Ministry of Defence, where his father is suffering from acute radioactive irradiation.

From these slim leads, Kendall weaves a tumultuous espionage thriller that has all the virtues and many of the vices of the myriad stories told by the likes of Tom Clancy. As a hero, Peter carries some of the everyman charm of Jack Ryan, but it’s the ragtag ensemble cast that elevates the book’s grim conspiracies. At 70, Simon Carter is still alive and using the tricks of his trade to zero in on the sunken treasure. Another standout is a Korean mercenary working multiple angles to turn the Acacia Lady’s missing freight into rogue nukes. There are also CIA agents, military operatives, Israeli agents and heirs to what the original crew dubbed “The Retirement Fund,” all maneuvering to get their hands on America’s lost “Broken Arrow”–military code for a non-wartime nuclear incident.

History loves company, and Kendall offers a plausible if long-winded scenario of past events in his thoroughly crafted story of war and remembrance.