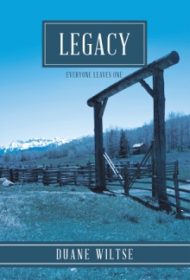 Based on true events, Duane Wiltse’s novel Legacy is set in Cody, Wyoming, in the 1970s and ‘80s.

When his single mom goes into drug and alcohol rehabilitation, Lefty Wolfson, 11, is taken in by a Shoshone family, where he finds a brother in his adoptive parents’ son Jingles. After school, Lefty fights in Vietnam, where he goes missing in action and is believed dead.

Five years later, he returns from war struggling with severe memory loss. He reconnects with Jingles and his high school sweetheart, Donna, but challenges await: Lefty and Jingles fall foul of corrupt game warden Carl Sanders, who has issues with Lefty. Not only were they enemies at school, but Sanders is married to Donna, who still harbors feelings for Lefty.

As Donna struggles in an unhappy marriage, Lefty and Jingles work to pay off huge legal fees incurred after Sanders arrests them for a hunting violation. Can the two men build a successful hunting tourism business, despite Sanders’ vendetta, and will Donna find a way to leave him for Lefty?

As the story explores these questions, the relationship between the two likeable men is a highlight. They are talented cowboys who never lose their cool in a crisis. Their dialogue is crisp and often humorous, and the author’s descriptive writing is equally strong.

Unfortunately, the pacing is uneven. Lefty’s love story with Donna gets lost in a long section describing the brothers’ hunting tours, and another seemingly major plotline about a stolen horse simply disappears. The novel loses momentum in the middle, and some scenes feel rushed. Also, changes in tense are jarring, as are inconsistencies (after losing a baby, Donna is told she can’t conceive again but later seems to have had a child who was put up for adoption).

Such flaws greatly impact enjoyment. Still, some might find the author’s vivid descriptions of the mountains and hunting, as well as his enjoyable characters, worth the ride.