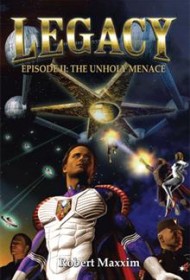 The second installment in Robert Maxxim’s New Age sci-fi series Legacy finds our hero again incarnated in a past life, but this time instead of wreaking havoc in the universe, he is a warrior for the noble opposition. Consistent with the prior volume, The Search for Love, this story blends space opera, metaphysics and the theme of immortal love in an ambitious – if not altogether successful – saga across space and time.

The largest hurdle to reading The Unholy Menace isn’t that it’s the second in a series (the author sufficiently catches the reader up); the biggest difficulty is stylistic. Dialogue can go on for pages without conveying where the speakers are. Adding to the confusion, many characters have similar names and they all seem to speak alike.

When the characters aren’t talking, the prose is at its best romantic, but more often it veers into florid territory. Here’s a taste: “A slim glimmer of hope touched [his] brow for once, his heart softened at the sight of beckoning tears that humbly scrolled down [her] cheeks with loving bow.” Even in the one chapter set on Earth and written in the first person, the dialogue is marred with stereotyped Southern accents: “Ya kids must be starved-tight worse than a fiddle string. Ain’t sure what vittles ya’ll put down up there in o’ter space, but in this-here shack we gotta taste for plants.”

The Unholy Menace sometimes conveys big ideas, but it often verges into preachy territory. While the plot is certainly intricate, the action is confusing and the characters so thinly developed that it’s just too challenging to get really invested. All told, the story will likely have limited appeal.