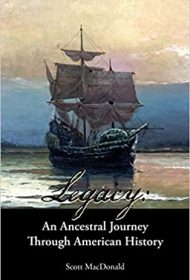 Coming from most people, the statement “The story of my family is in many respects the story of America” would sound more than a little presumptuous. However, it isn’t far from the truth for Scott MacDonald, as he proves in this genealogical survey.

Initially knowing little, MacDonald began seriously researching his family tree over a decade ago, assisted by professional genealogists. Organizing his findings here, he devotes one chapter apiece to each branch of his family.

He found that his maternal ancestors generally settled first in colonial Virginia, his paternal ancestors in New England, and that these ancestors were most often English, Scottish, or German (but also Welsh, Dutch, and Native American).

Famous names and events, even to non-history buffs, appear throughout. Pocahontas makes a cameo as an unconfirmed ancestor of his. He also discovers family connections to John Adams and John Quincy Adams, Winston Churchill, Princess Diana, and Robert E. Lee. MacDonald’s ancestors witnessed, and sometimes suffered through, witch trials (albeit not the most famous one) and fought in famous battles, both as unnoticed foot soldiers and as recognized leaders and decorated heroes.

The author doesn’t spend much time on analysis, generally sticking to a straight recitation of birth dates, family relationships, and other facts. Interesting themes emerge briefly, such as America’s long-standing North-South divide, from long before the Civil War (his ancestors fought on both sides). His Northern forebears often first came as middle-class Puritans fleeing religious persecution, and the Southerners as wealthy royalist supporters fleeing political persecution after King Charles I’s overthrow.

Readers will likely feel the lack of a deeper exploration of such historical topics. More vivid descriptions of places his ancestors lived and details of their daily lives would also have helped draw general readers into the undeniably rich material.

The lack of such information impacts the book’s appeal to general readers. As such, Legacy will be most compelling to the author’s family, to whom he dedicates the book.