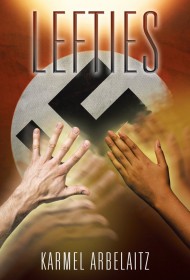 When Lefties begins, the unnamed protagonist/narrator of the novel has just made a horrifying discovery. Following the death of his grandmother, whom he had barely known, the nursing home staff hands him her belongings, including an antique basket. The basket is brimming with items rich in family history, but it is the diary contained within that will cause the narrator’s world to come tumbling down.

The diary begins with these chilling words: “I have written quite a few lines about my life; I have written them in every possible way and place… But these are not them. I need to write this; I need to be released from the burden of carrying these secrets to the grave…I don’t intend to create more suffering than needed, but the truth has to come out some day.”

What follows is a ghastly confession of brutal crimes, mostly committed during the World War II era, leaving the narrator with a hefty burden on his conscience. What should he do with the detailed information now in his possession? What could he do, now that the people touched by the tragedies are all dead? The book consists almost entirely of deeply disturbing words from the diary and the narrator’s agonized responsive musings.

Author Karmel Arbelaitz has an excellent command of the English language; the narrator’s vocabulary in his philosophical contemplations is sometimes esoteric, but fits his persona well. More importantly, Arbelaitz has crafted an intriguing storyline. The narrator is placed in a nearly impossible situation, a milder version of a Sophie’s Choice dilemma. And, just when the plotline appears to be winding down, there’s a final twist that shakes up everything, but makes perfect sense given the subtle cues provided.

With its haunting, 19th-century quality reminiscent of Edgar Allan Poe, this book is well worth a read.