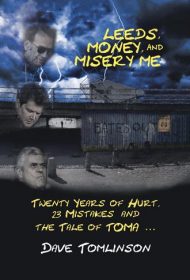 The Leeds United Football Club celebrated its centenary in 2019. With Leeds, Money, and Misery Me, dedicated fan Dave Tomlinson takes an in-depth look at the last twenty years—and what he sees is not pretty.

Tomlinson lays out how this once-proud professional football club (“soccer team” to Americans) endured more than two decades of gross mismanagement, financial disaster and short-sighted strategies that almost put the club out of business. Picking what he sees as the 23 worst mistakes the team made in the last 25 years, he imagines what might have been had those missteps been avoided.

The author recounts events on the pitch, of course, but also expertly lays out behind-the-scenes squabbling, corporate power plays, personnel moves and salary figures. As a finance director in the UK’s National Health Service, Tomlinson is a numbers guy, and he also delves deeply into Leeds’ convoluted books. While this information is important in explaining Leeds’ near-collapse, at times this lends the narrative the feel of a business textbook: “The new treatment had the effect of increasing fixed assets by 14.5 million (pounds) in 1998 and the total rose to 16.0 million in 1999 and a whopping 28.6 million in 2000. The relative amortisation charged to the profit and loss account was 5.1 million (pounds) in 1998…”

Tomlinson also lapses into soccer jargon (“Viduka’s back-heel sent Bowyer breaking towards the penalty area and Fowler was waiting to float an impeccable chip over James…”), and he references the different levels of competition and the movement of teams between them (the Premier League, Champions’ League, FA Cup competition, etc.), which might prove challenging for non-soccer fans.

The book is written for soccer devotees, however, and Leeds’ fans, especially, will eat this up—even as the miseries recounted are sure to raise their blood pressure. As Tomlinson notes with a winking awareness: “The lot of the United fan is not a happy one, but still they come…”

Also available as hardcover and ebook.