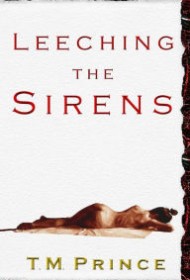 This debut thriller by author and real-life blood artist T.M. Prince follows a traumatized art student, motivated by injustices in his life, who kidnaps women, siphons their blood, and uses it to paint their portraits. The novel’s recurring themes of power, subjugation, truthfulness, personal responsibility, and art as subjective and objective expressions of beauty add dimension and maturity to a story that flashes back and forth to the characters’ adolescent high school days.

The novel begins when college student Jessica Shawsen is abducted and rendered unconscious. She awakens naked and bound to a chair. Her blood drips into glass beakers from needles inserted in her arms. A masked man stands at an easel before her. Terrified, Jessica realizes he’s painting her portrait with her blood.

Suffering weeks of captivity, Jessica’s blood supply wanes as the artist composes multiple portraits of her. She learns that she’s the third model in the artist’s series titled The Five Sirens, the singing seductresses from Greek mythology who lure men to their demise. “[The] trick is to kill the siren before their song ends,” the artist informs. With that, Jessica realizes she’s bound for death.

Or is she? Over time, Jessica becomes bewildered by the feelings the artist provokes in her. The author’s portrayal of the psychological and emotional tension between captive and captor stands as the novel’s greatest achievement. Readers won’t overlook the truly terrible things the artist does to his victims, yet the unconventional bond that forms between him and Jessica shows that compassion can exist in inhumane circumstances.

Leeching the Sirens is intelligently written and intense. Debauchery is as much a part of the artist’s drive as is his desire to perfect on canvas the beauty and form of the female figure. To that end, the author presents well-defined character portrayals and doesn’t rely on gratuitousness for the story’s suspense. Despite a rushed, somewhat rudimentary ending, readers of the genre will appreciate this fine debut’s grotesquerie.

BlueInk Heads-Up: The author considers the artist his alter-ego. The novel’s blood portraits can be viewed on Prince’s website: trevinprince.com.