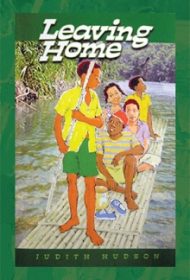 In Leaving Home, author Judith Hudson tells the story of a young boy and his friends and family as they live in, and ultimately leave, Jamaica.

Todd is 12 years old and living with his mother and sister; his father died in a car accident, and he’s eager to find a replacement role model. Todd is disobedient, tormenting his older sister and driving his mother to distraction, but they’re close-knit and loving nonetheless. The story is largely episodic, following Todd’s adventures, and has no central conflict to speak of.

The narrative includes some funny set pieces, as when Todd attends a party with his sister. He’s sent along ostensibly to chaperone but pretends to be drunk with the aim of getting her in even bigger trouble. It plays out well, and the family dynamic is believable. These stories follow a pattern—admonition, misbehavior, punishment, declaration of family love —-that will be familiar to anyone with a child who doesn’t play by the rules. They’re funny and heartfelt.

There are problems, though. Todd uses unrealistic language that makes him sound older than he is; for example: “Well, that’s women for you, never knowing what they really want. They were all a part of nature’s beautiful, wondrous, but confused creatures. But I loved every one of them.” Additionally, the back cover copy sets this up as a story about a boy who is trying to persuade his mother not to make him move. However, the move is introduced only at the very end of the book and happens with no challenge whatsoever from Todd.

While the story has many charms, it never coheres into a credible and compelling whole. Some re-thinking and revision with an eye to the issues mentioned above would help it reach its fullest potential.