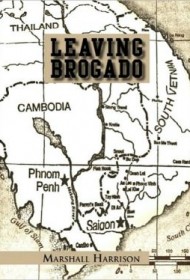 Marshall Harrison presents this book as one Marine’s memoir of his experiences in Vietnam, but readers will quickly realize that these recollections are no more factual than those of George MacDonald Fraser’s popular character Harry Flashman. Leaving Brogado is actually a funny, honest, thoroughly engaging novel, published (posthumously) by a writer who experienced three tours of duty in Vietnam, one who knows and handles his time, place, subject matter and characters with consummate assuredness.

It is 1967 and Beauford T. Adams and his buddy AC Murphy, both 18, have to get out of Brogado, Texas, because if the tiny town ever held any future for them, they have put a huge crimp in it by screwing up their chances of high school graduation. So they hightail it to the military recruiting station, where they learn that the lack of a high school diploma rules out all armed services but the Marine Corps. No problem, says the grinning, bamboozling Marine sergeant: in the Corps that lack can actually be an advantage.

It will not be the last time they are bamboozled as they go through the rigors of Marine boot camp and on to combat in Vietnam. There, Beau battles on two fronts: with the North Vietnamese–a war whose stark reality is told as only one who has experienced it can–and with a bearlike black Marine from Detroit named Chisum. The latter struggle will make you laugh and maybe even tear you up.

It is difficult to exaggerate, or even adequately convey, the picaresque charm of Leaving Brogado. It has the jaunty, knowing air of True Grit and the breezy intelligence of Catch-22. Most of all, it has a believable hero–two, really, with Chisum. They join a long line of fictional young men who, with grim humor, have told the truth about war–and about the friendships found within it.