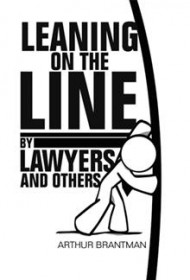 Who can resist a great lawyer’s joke? Its power derives from the popular notion that an unwitting public is at the mercy of unscrupulous attorneys who manipulate the legal system in order to make their fortunes.

In his book, Leaning On The Line By Lawyers And Others, retired lawyer Arthur Brantman reveals that there may be some truth to that notion. To illustrate this point, the author draws from his extensive experience creating real estate development contracts where transactions such as splitting a title company’s rebate with a seller’s lawyer may hint at collusion.

But if some members of the fourth estate are guilty of greed, he argues that their sins may be eclipsed by the failings of an adversarial legal system that compromises the search for truth and justice. Brantman also suggests that clients, in their quest to avoid conviction, are just as willing to skirt the line between right and wrong.

The author devotes much of his book to defining the boundaries of this line, assembling at book’s end a series of questions he terms “Waldos.” These invite readers to weigh in on the ethical issues he discusses in the narrative. Considering ethical questions can be weighty stuff, but Brantman showcases these dilemmas in an entertaining fashion. He manages to keep it light without diminishing the importance of these paradoxes that he says form the web of our current justice system.

Brantman peppers his stories with convincing detail that suggests he was an excellent lawyer back in the day – smart, savvy yet often conflicted by his profession’s relentless demands. His writing style is engaging enough to warrant a sequel. With this second book, he will do readers a favor if he can hire an editor to tighten up his prose, which is often wordy.

In Leaning, he holds up a mirror to our current dysfunctional legal system. In the next installment, we look forward to reading about his prescription for fixing it.