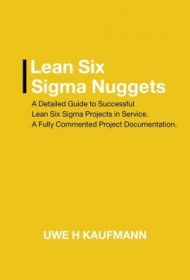 The Lean process was originally developed by Toyota to reduce waste in the manufacturing process. Lean takes a holistic view, seeking to improve a “process from customer request to delivery.” Developed by Motorola, Six Sigma focuses on solving specific problems, such as reduction of defects in television production. The Lean Six Sigma methodology draws from both approaches and, according to Kaufmann, has been “contributing to saving billions of dollars” across many industries for over 20 years.

Kaufmann’s main study involves a bank facing a decrease in market share due to “process problems” financing used cars.  It demonstrates how the application of Lean Six Sigma through the DMAIC cycle improves the credit application process and increases the bank’s profit.  He employs a wide variety of statistical charts, which elucidate how these graphical tools function in Lean Six Sigma and reveal its problem-solving power.

Written in an academic tone, with many mathematical calculations, Lean Six is a dense read. Kaufmann’s reliance on graphical aides can also be problematic, as some charts contain too much information in small, blurry formats, making them almost illegible. Additionally, the book contains many distracting typographical errors.

Kaufmann writes for those already somewhat familiar with the Lean Six Sigma methodology, and he assumes a base level of statistical and business knowledge. Those readers will benefit from his book. Lay readers will likely struggle with the content and the flaws in Kaufmann’s visual presentation.