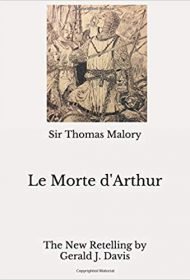 The latest classic work of literature to be interpreted by Gerald J. Davis (after 2016’s The Canterbury Tales: The New Translation) is nothing short of “the earliest great work of English prose”: Sir Thomas Malory’s story of King Arthur and the Knights of the Round Table. This unabridged edition contains all 21 books—from Arthur’s conception when King Uther Pendragon lay with Igraine in the Castle of Tintagel to Arthur’s death battling Sir Mordred at Barham Down—as well as a fascinating (and much too short) Note on the Retelling, which briefly goes into Malory’s incredible life.

The new retelling is similar to other interpretations (see Project Gutenberg’s Le Morte D’Arthur): The 1485 preface by William Caxton is just slightly abridged, for example. The narrative is straightforward and striking in its simplicity, seamlessly blending the texts from two different editions: Caxton’s original version and a manuscript found at Winchester College in 1934 believed to be closer to Malory’s edition.

Powered by Davis’ storytelling sensibilities, this adaptation embraces the classic language and meter of the time while also retaining a modern-day readability: “Then Sir Lancelot looked about him and espied an old Chapel, and there he thought he might find people… When he looked within, he beheld a fair altar, quite richly covered with a cloth of spotless silk, and upon it stood an exquisite candlestick which bore six large candles…”

However readable, though, the prose suffers from an overall lack of description, which makes for a two-dimensional reading experience. Iconic scenes that should be fully immersive —such as when a young Arthur pulled the sword out of the stone and anvil—are underwhelming and flat in their portrayal. This is where Davis could have deviated a bit from the literal translation to subtly enrich and revitalize the beloved myth.

Lack of description notwithstanding, fans of Arthurian legend will find the time and effort put into this shelf-bending, 726-page retelling impressive. While the narrative could be enhanced, as noted above, Malory’s timeless tale remains powerful more than 500 years after its initial release. Davis says it best: “…let us travel back through the dim mists of antiquity and accompany these valiant knights and their fair ladies as they journey upon their perilous quests.”