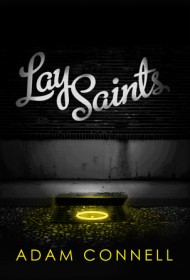 Adam Connell’s Lay Saints is a sleek homage to noir with a fantasy twist.

Calder is a grifter using his psionic talents to communicate with coma patients on behalf of their families. He’s recruited by Sotto, boss of a New York City crew that sells its unique talents to the highest bidder, using mind control like the mafia uses muscle. Unfortunately, the target of Calder’s first job is a city councilman immune to psychic influence. Worse, Sotto’s isn’t the only crew in town, and everyone seems to have a part in this job.

When he gets involved with Tamm, a stripper from the rival’s club, Calder trips headlong into the shadowy underbelly of the city, filled with betrayals and the occasional glimpse at redemption.

Lay Saints is narrated by a prisoner using telepathy and remote viewing to keep up with his old associates. His audience, a cellmate with an erased memory, is a central character in the story — he just doesn’t know it.

This isn’t just a gimmick to entertain but an integral part of the plot that drives tension – and a testament to the author’s talent. Connell’s cast of anti-heroes is colorful (a transsexual stripper works alongside a priest-turned-enforcer, e.g.), and although the characters sound a bit alike at first, the dialogue is addictive. (Connell nails memorable descriptions in a few short sentences: “She looked like a generic attorney. Not a lawyer, an attorney. Crisp black hair, tailored Armani, flat professional shoes that could hold a shine.”) His style is in turns reminiscent of Elmore Leonard, Chuck Palahniuk, and William Gibson, but his voice is all his own.

The plot of Lay Saints isn’t all that original, but it doesn’t have to be. The reader cares less about what’s actually happening than about what makes these characters tick. In that sense, Lay Saints is the best kind of character novel. It’s sleazy, it’s violent, it’s honest, and it’s a damn good read.