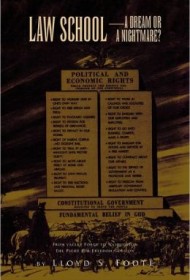 Law School: A Dream Or A Nightmare? is ostensibly a novel centering around Dexter and Judy, two married law school students passionate about the rigors of the legal training in which they are immersed. They start each morning excited about whatever topic is scheduled for class that day and go to bed enthralled about what’s on tap for tomorrow. But while their ever-upbeat interactions frame each day, the bulk of the story isn’t really about Dexter and Judy. And it isn’t really about law school. It’s about the U.S. Constitution and how its meaning has been twisted through the years.

Each day in class, Dexter and Judy’s professor introduces a section of the Constitution for discussion. Students lead the discussion, deconstructing that section often along ideological lines that can be predicted by Foote’s description of himself on the book jacket. He notes that he is “a firm supporter of the constitution (sic) of the United States” who laments “the abuse heaped upon it by the federal government and the judiciary in particular.”

Thus, class discussion on abortion centers on how the court “stepped beyond their authority” with Rowe v. Wade; talk about God and religion in the public sphere underscores how the Constitution never actually refers to “separation of church and state.”

While such arguments might make for intellectually stimulating reading in a nonfiction book, they are fatal in a novel. Foote offers little in the way of tension or plot building to a climax. Dexter and Judy’s relationship is as tame as the “hugging” and “snuggling” they engage in on the rare occasions when they’re not talking about the law. The story is didactic in the extreme.

Foote would be advised to re-cast his legal arguments in a nonfiction framework. As it stands, this is a novel filled with big ideas but, alas, no story to speak of.