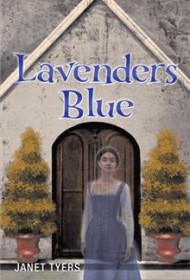 The moors, misty weather and centuries-old mansions of Scotland lend themselves to ghost stories. Author Janet Tyers creates a strong sense of place as she relates the story of Jean, a contemporary young woman haunted by the apparition of a 16th-century French girl, Janette.

The first chapter sets the tone that not all has been well with Jean because the ethereal presence in her life has strained her relationship with Stuart, the man she loves. From this point, the story flashes to the past, explaining how they meet, marry, refurbish their castle-like residence and face Janette.

Jean is 16 years old when she meets Stuart MacDonald, four years her senior and a member of a popular rock band. Many references are made to Stuart’s charm to the opposite sex, but he’s immediately smitten with Jean. For reasons they can’t explain, the pair visit an abandoned mansion. This is the first time they encounter the otherworldly specter associated with the scent of lavender. A portrait of Janette shows her to be the mirror image of Jean.

As the story unfolds, Janette attempts to take control of Jean as a means of revealing the tragedy of her own archaic love story. Regrettably, however, there’s little tension when Janette is present.

The novel suffers from several other flaws. Grammatical errors and poor sentence structure, as well as inconsistent transitions, prove distracting.  Dialogue is stilted: “ ‘Let us call the police,’ said Pete, going out the door.”  Several incongruous exchanges between characters are perplexing: “ ‘Do you have any idea what’s going on, Stuart, [sic]’ asked Colin. ‘No but I have a good idea [sic]’” Stuart answers.”  And, the climax is, well, anticlimactic.

Tyer’s strength lies in her ability to establish a strong sense of place. Unfortunately, it’s not enough to allow readers to suspend disbelief – either for Jean as a young woman dealing with the unknown or for Janette’s phantom spirit — and the book falters as a result.