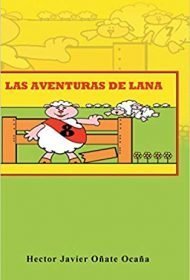 One night, when Javier can’t fall asleep, his mother suggests he count sheep, He soon enters an imaginary world populated by a sheep called Lana (which also happens to mean “wool” in Spanish), her family and friends, including: Eiger, a wolf; Vampy, a vampire; and Cuernitos, a snail.

Lana is an independent, curious creature who, among other things, learns to fly a plane, plays video games, and takes a ride in a rocket. On her rocket trip, she meets the Soviet dog named Laika, who was one of the first animals in space. In this story, Laika survived the test flight and decided to stay and live on the moon. At the end, and as an aside, the author includes information about animals that were sent up in the first space flights. (This could have easily been left out.)

The book is divided into 15 chapters and features scattered, sparse black and white drawings throughout. It’s unclear what age group the author has in mind. With its long paragraphs and scant artwork, the book looks more suitable for advanced readers. Yet the language—with its use of diminutives (perrita, casita, animalitos; “little dog,” “little house,” “little animals,” etc.)—seems aimed at a much younger audience, as are the author’s moralistic messages; he should consider that even young readers can understand these messages without a grownup spelling them out.

Due to grammatical errors and run on sentences, the book needs a thorough trimming and copyediting. This, in the end, will provide readers with a more satisfying read. As it stands, the book is likely to have difficulty engaging young readers.