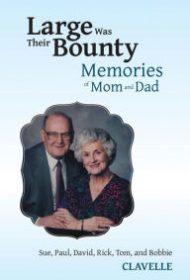 Memoirists sometimes throw a hand grenade into the lives of others by sharing private details. Other times, they exaggerate their achievements in the hope of creating a legacy. To their credit, the authors of Large Was Their Bounty have chosen neither path. Instead, they have created a valentine for their now deceased parents—a tribute that the authors emphasize was created “with no pretense of objectivity.”

Their book chronicles the lives of their parents, starting from their childhoods in Winooski, Vermont, a diverse town populated by French-Canadian, Polish, Lebanese and Irish working class immigrants who sought employment in the flourishing textile mills of the region. They chronicle not only the heady days when food was on the table and laughter came easily, but periods when their father struggled with alcoholism and their mother almost single-handedly kept the family together both physically and mentally.

As much as it is a poignant narrative, Large Was Their Bounty also provides a rare opportunity to revisit the concept of a “company town”: cities like Winooski that had a single industry that provided most of their residents with a living. While they are now a relic of the past, here readers relive what it was like to be a benefactor of its largesse as well as a victim when, as in the Clavelles’ experience, the company left town, stripping its residents of their livelihood.

It’s a tribute to these six authors that they came to a consensus about the many memories shared in their book. The back of the book also contains the collected memories of their parents’ 15 grandchildren.

Readers who prefer a narrative in strict chronological order may at times feel frustrated by memories shared sometimes out of order. If they can accept this limitation, however, they will find a heartwarming story. The Clavelle parents taught their children how to love—and in these troubled times, that’s no mean feat.