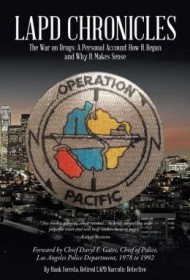 Hank Foresta spent 28 years in the Los Angeles Police Department, most of that time fighting drugs. Now retired, he has written a memoir detailing both his career and the changing nature of America’s war on drugs.

Foresta was on the drug war’s front line, a line that kept moving. When he began his career, police chased users, but as the war escalated, they began targeting dealers. Eventually, the emphasis was on the cartels. Foresta pursued them all and loved it. “The game of finding ‘bad guys’ and arresting them was my cup of tea,” he writes. “I couldn’t wait to get to work. It was the ultimate high.”

The book follows his career from his first day on the job in 1964 to his retirement. In the recounting, Foresta and his fellow officers handle minor drug busts, big raids, prolonged investigations and a variety of dangers. A compelling storyteller, he offers readers interesting and sometimes entertaining bad guys, as well as details about notable and routine cases. Such is the life of a cop.

Foresta touches on his personal life, including the tragic death of a young son, and vents about hippies, “liberal” judges, defense attorneys and a legal system he often disagrees with. He repeats this distaste several times, where once might have been sufficient. Other flaws include the occasional misuse of words (“she got her gander up”) and storylines that could use fleshing out.

Even so, Foresta knows his way around a narrative. In some passages, such as the chapter about a Thai marijuana smuggling caper, his writing is flat-out gripping. He can also be funny, as in the story about standing up at the wedding of one of his snitches.

This book isn’t perfect. But no matter where a person stands in the debate on drugs, LAPD Chronicles is an informative read that will resonate for those on both sides of the drug war argument.