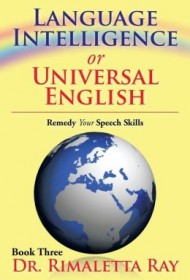 In this final installment of her three-part ESL series, Dr. Rimaletta Ray offers remedies for English language learners who struggle to overcome the results of undisciplined learning methods. Although the title focuses on speaking skills, in reality the book has four sections that cover speaking, writing, reading, and listening, to which she applies her “rules of right language behavior.”

In her over 35 years of teaching experience at the university level, Ray (a non-native speaker of English) has discovered that it is possible to change mental patterns that generate incorrect speech into patterns that facilitate controlled, conscious framing of thoughts. In order to do so, she argues, the patterns of the native language have to be replaced — by implementing “aware attention” — with the structures inherent in English, using the specific grammar, syntax, and vocabulary relevant to the language-learning activity in question. (Thus, the four sections, which interrelate.) The book’s second half contains exercises intended to reinforce the establishment of a correct neural pathway to English language mastery.

The author’s premise is reasonable, although not novel or innovative. It hearkens to the methods in Soviet-era texts still used today in Russia by teachers and tutors of English. While there are now a plethora of second language learning devices and programs that are more holistic and intuitive (i.e. Rosetta Stone), the value of the structured methodology remains indisputable. Some people do make better progress with strict, systematic learning methods, especially when the science behind such methods is incorporated into the lessons, as in Ray’s books. Standing alone, however, the book is difficult to follow because the author relies on and refers to information found in books 1 and 2.

What is clear, however, is that the text requires the services of a professional, native-speaking editor to catch not only typos, but also issues with passive sentence structure, wordiness, syntax, and outdated idioms. Such errors are unacceptable in a manual for ESL learners.