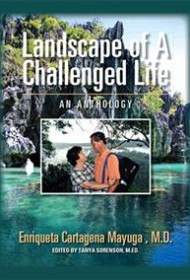 Landscape of a Challenged Life is a compendium of new and previously published “poems, essays and short stories” by Enriqueta Cartagena Mayuga.  The collection also includes an assortment of stock photographs interspersed with personal snapshots.

The first 15 pages contain introductory notes and reviews of Mayuga’s previous collections. These are followed by six chapters of multi-genre text and visual material. The book concludes with a list of “Pearls,” maxims excerpted from the preceding text.

Mayuga’s poems and prose encompass the challenges of coming of age in the Japanese-occupied Philippines and of immigrating to the U.S., followed by the rewards of family life and medical practice over four decades, culminating in reflections on aging and acceptance of mortality.  While Mayuga’s ethos is eager, honest, and sincere, epitomized by titles such as “I Chose America,” and “Life is Beautiful,” the experience of reading her book — given its many genres, images, and formats — can feel more like leafing through a stranger’s personal scrapbook rather than purusing a literary volume created with an audience in mind.

The poems rely predominantly on truisms and abstract language, as in: “I had nowhere to go but up/Nothing to gain but victory” and “Failure was not an option—/Disgrace to the family was a/ fate worse than death.” The most promising poetic moments are those where Mayuga incorporates personal narrative and concrete detail, as in “My papa gave me a canoe,/ One day I fell overboard.”  Mayuga’s prose is generally stronger because it focuses on particular people, times, and places.

This is a rich vein of material. If Mayuga could concentrate on developing a collection of essays that further explore her coming-of-age, immigration, and acculturation to American life, replacing the poems, pictures, and front-matter with stronger narrative scenes, she would have a work that deeply engages readers. In its current form, Landscape of A Challenged Life is most likely to appeal to the author’s friends and family, but there is great potential here.