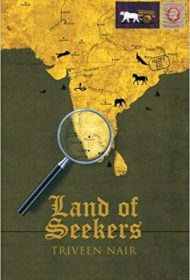 From the Khyber Pass to Calcutta, from Africa and Arabia to India, merchants and traders in the 18th century traveled a network of land and sea routes in search of wealth and power.  In his Land of Seekers, set in the year 1766, Triveen Nair offers a collection of stories depicting his version of the colorful characters who must have journeyed on these perilous ways to riches or disaster.

Some of these characters have only minor roles, like the hunter who nets a peacock or the goat herder killed by a lion. Others are more fully developed and appear in several stories.  One such character is Adam, an Englishman in search of the formula for the perfect sword.  He makes his entrance in the book’s beginning, traveling with a caravan that is decimated by an earthquake near the Khyber Pass.  Later, he acquires an exceptional sword, only to lose it later to the warlord, Hydr. Hydr has his own part to play as the treacherous conqueror of several small kingdoms.  Other major characters include Murtza, the slave trader, and Rawout, the thief.

The author embellishes his tales with period details that readers may find as interesting as the stories.  For instance, he describes how a palanquin is made and how a flintlock is prone to misfire.  He tells us how ravenous slaves ate the locusts that slammed into the sail of their ship.

The stories offer plots that could be page-turning, except that their pace is slowed by technical issues. In many portions of the book, the author excessively uses pronouns instead of character names; often readers don’t know who the subject of a passage is for several pages. The text is also marred by run-on sentences, fragments, tense and subject/verb agreement issues, and numerous dangling clauses.

The narrative requires editing to correct these problems. Once these mechanical issues are addressed, however, the book should provide entertaining reading, especially for fans of period pieces.