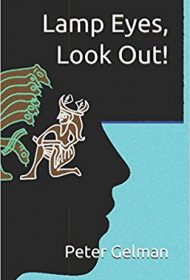 Peter Gelman’s Lamp Eyes, Look Out! is a wonderfully surrealist, genre-bending novel that uses themes from classical philosophy, literature, and mythology to engage with postmodern problems.

Gelman’s mouthpiece is an unnamed narrator living in Washington D.C who gains but ultimately loses the ability to predict the future, along the way becoming a strategic asset for covert government forces. The story slips continuously between a future where scientists endeavor to restore the narrator’s precognition and a present where he struggles with insecure relationships: his girlfriend Alyssa, his girlfriend’s ex-girlfriend (and his romantic rival) Aubrey, and his best friend Sydney.

The narrator is a devotee of Greek mythology and classical music who believes the future somehow casts a shadow on the past. He’s a nice guy, neurotic with a dark side: In one memorable scene he darkens Aubrey’s Halloween party by turning his predictions of each party goer’s death into a macabre game; later, when Aubrey taunts him with prurient details of her affair with Alyssa, he cuts her down by sadistically foretelling the cataclysmic decline of her health. Eventually, Aubrey sets events in motion that force the narrator to participate in a clandestine government project, separating him from Alyssa at a critical moment.

Gelman’s writing, rich with symbolism and subtext, deftly weaves disparate threads, casting the illusion of plotlessness while culminating in events that feel genuinely fated. His style is a mix of Kafkaesque surrealism (the narrator is frequently distracted by visions of ape-like creatures) and Vonnegut-like playfulness (e.g. the future scientists whirl the narrator in a centrifuge until he passes out trying to restore his precognition, but instead he has seemingly trivial dreams about a man repeatedly trying and failing to get a date). Fans of Haruki Murakami may also recognize some stylistic similarities.

Gelman is a remarkable literary talent. As Lamp Eyes, Look Out! skillfully explores important themes (Is western culture in decline? Have we already seen the end of progress?), it delivers a challenging, ambitious, and satisfyingly smart work.

BlueInk Heads-Up: The Star designation is awarded with the recognition that copyediting issues remain in need of attention, including inconsistent spellings of character names and improperly placed quotation marks.