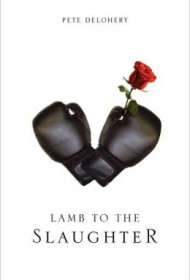 Set against the vividly rendered backdrop of professional boxing, Pete Delohery’s hard-bitten yet generous-spirited novel focuses on three men at crossroads in their lives.

Mike McGann is 32, old for a boxer, and he’s promised wife Madge one too many times that this is positively his last bout. So when she finds out he’s slated to fight Rufus Hilliard, nicknamed “Hurricane” for the force of his punches, Madge walks out.

Boxing was Rufus’s means of escape from the Brooklyn slums, but he’s a lot smarter than the menacing thug his sleazy manager makes him pretend to be for the media; he suspects that he’s being set up to lose the McGann fight. He’s right: his cornerman, Charlie O’Conell, a compulsive gambler and alcoholic, is being leaned on by a loathsome gangster known as the Fat Man to doctor Rufus’s water and incapacitate him.

Will Charlie do it? Which will triumph in the ring: Mike’s experience or Rufus’s raw strength?

The answers aren’t as important as the moving portraits Delohery creates of three men, each damaged by a brutal world, who flee from personal demons toward the only imperfect redemption available to them: victory in a fight. The author does an excellent job of stating the case for and against boxing, counterpointing the scary pronouncements of a doctor about the percentage of fighters suffering from measurable brain damage (very high) with the simple eloquence of a young fighter who says, “The good doctor has never known…the nightmare of poverty…and I pray he will never have to know what it can mean to have no place to stand, to be… less than a man.” (Some of the author’s ellipses have been eliminated in the previous sentence; the comments are delivered through an interpreter who speaks haltingly as he translates the fighter’s statement.)

The ending is awfully abrupt, and Charlie’s revenge on the Fat Man is both disgusting and improbable, but this heartfelt tale makes a powerful emotional impact.