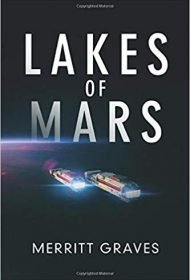 Merritt Graves’ debut novel, Lakes of Mars, is a military science fiction adventure about a young Fleet command student, who upon arriving at a military school located on a space station, realizes he has landed in the middle of a grand-scale—and potentially deadly—conspiracy amidst an intergalactic war with the nightmarish Verex.

When Mars resident Aaron Sheridan arrives as a cadet at Corinth Station—the closest space station to the Rim, where all the fighting is occurring—he’s immediately struck with its lawlessness; the instructors don’t seem to care when students are bullied and brutalized.

Fearing for his life, he and his new friend Sebastian— a whiz-kid whose intelligence is off the charts—join forces with a group of students who embrace him for his piloting abilities. Together, they plot to take down Caelus, a sadistic student officer who seemingly has the run of the place. But as Aaron, Sebastian, and company attempt to understand the multi-layered mysteries of Corinth Station, they stumble across a bombshell revelation that will put the war in an entirely new light.

While the world-building and overall description in the novel is superficial at best, Graves excels at creating three-dimensional characters that readers will understand and identify with on a deep level. Aaron is wonderfully surprising—enlisting in the Fleet as a form of suicide because he wants to get away from tragedies in his past, only to find himself in the role of reluctant hero. Caelus is equally intriguing, rather than a stereotypical villain. Additionally, the action scenes at novel’s end are exceptionally executed.

Lakes of Mars is an action-packed, breakneck-paced science fiction adventure. While comparisons to Orson Scott Card’s Hugo and Nebula Award-winning Ender’s Game will be all but unavoidable due to the similar plotlines, Graves offers a compelling read: Lord of the Flies meets Starship Troopers.