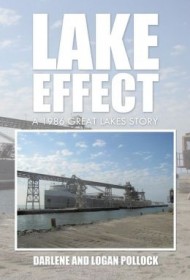 The narrator/heroine of this potentially interesting novel about merchant mariners working the Great Lakes reads Chekhov, can play Moonlight Sonata on the piano and sweetly remembers her late grandmother. But don’t mess with her. After five years as a deckhand on male-dominated freighters, young Nicolette—“call me Nick”— Strickland can brawl like any sailor. Once, a bulky fool named Skorenski tried to grope her: “I maced him,” Nick tells us, “then showed him my left hook.”

This is the good stuff in Lake Effect, the compelling, though long-winded, tale of a smart, no-nonsense 26-year-old making her way on hard ships that slog from Cleveland to Detroit to Sault Ste. Marie. Nick even finds time for love. Aboard the S.S. Gentry, bound for Duluth with 14,000 tons of coal in her bunkers, Nick and First Mate Dave McCracken begin a tentative secret romance.

It’s unfortunate that Ohio-based co-authors Darlene and Logan Pollock show no gift for concision or selection of incident. More than 525 pages long, the book is stuffed with tedious filler. “Yesterday at 19:25 hours, the engineer on duty found a small amount of oil in the condensate line when he was sampling condensate water,” one dull engineering report begins, then drones on for 20 more lines. Most of page 396 is devoted to a restaurant order, complete with glasses of water and dinner roll.

The Pollocks (and a good editor) might do well to cut the text in half and deepen its observations about sexism aboard ship, the gulf between hardworking “lakers” and the clueless “shore birds” who would change their way of life, and the attitudes and instincts of sailors — especially Nick’s. We learn that she scorns yuppies and dislikes “limeys.” She speaks Russian (her grandmother was a Russian Jew) and rides a Harley. But these underfed details get lost in a flood of useless words. In the end, there’s far too much open water between this promising story’s scarce dramatic incidents and its rare revelations of character.