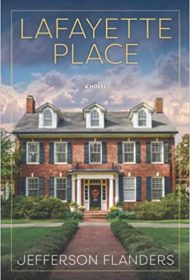 Lafayette Place tells the story of three generations of the Kincaid family, capturing their triumphs and struggles.

The novel begins with the family preparing the Princeton family home for sale after the death of its patriarch, Alexander, a professor at the university. It then flashes back to the first American Kincaid, an indentured servant from Scotland, before returning to Alexander’s courtship of the artistic Swede Karin and his career. It subsequently follows their four children, mostly focusing on middle son James, a journalist who covers Reagan and Gorbachev’s nuclear negotiations in Iceland in the 1980’s, and James’ wife Julia, who has known the Kincaids since childhood.

The book dramatizes the tension between Alexander and Karin’s expectations for their children to pursue “intellectual,” upper-class careers and life-long marriages and their children’s life choices. Alexander’s son Beau joins the Army and divorces his first wife, while daughter Hanna becomes a landscaper. It also depicts family tragedies, showing the couple’s son Desmond (Des) struggling with mental illness and James and Julia’s marital troubles, among other issues.

The novel feels grounded in emotional reality, capturing the characters’ quiet but powerful inner turmoil. Beau struggles with his anger, arguing over politics and the military at a dinner party and creating an uncomfortable situation with a friend. Alexander suffers from public criticism of his latest book. The characters are thoughtful and reflect on themselves in first-person narrative and letters and emails.

Unfortunately, much of the novel lacks vitality, with the author telling rather than showing what is happening. For instance, Des’ life has some powerfully dramatic moments, yet they are often summarized, with others telling parts of his story, rather than brought to life. Additionally, characters give each other information that readers already know, which quickly becomes tiresome.