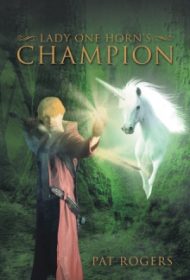 With echoes of Harry Potter and The Lord of the Rings, this fantasy novel presents an orphaned young man who is chosen to battle an evil leader of an alternate world.

Tris Carter Horne is an unremarkable college student: short, skinny, and with a strange birthmark on his rump and a history of nightmares. Tris also has recurring dreams of a beautiful, red-haired young woman with emerald eyes.

One day, he’s attacked by a dark entity and whisked through a portal into another dimension. This other world is inhabited by fairies, elves, dwarves, unicorns, magical talking horses, and humans who live in an undeveloped medieval society.

A family caring for Tris after the attack notices his birthmark (the sign of Lady One Horn, a powerful unicorn), which indicates he’s the chosen one to fight the Dark Lord and his Once Men (mutated beings). Villagers then take Tris to the castle to meet King Andros. He also meets Princess Katrina (who turns out to be the girl in his dreams). Tris is trained for battle and shares modern knowledge with villagers; for example, he designs a wheelchair for a crippled girl and bowstrings and longbows for the soldiers so they can fight from a distance.

Throughout Tris’ adventures, no one believes this slight young man is Lady One Horn’s Champion until he drops his pants to prove it. This ongoing situation appears just enough to remain amusing and injects freshness into the overly familiar elements.

Overall the writing is clear and descriptive (“…their bodies flowed like water from one shape to another, and they stank of death and corruption”). However, the book requires proofreading to fix typographical errors, such as misspelled, missing, and extra words.

This is a highly derivative but entertaining story that can be enjoyed by all ages. Readers will appreciate the light tone, Tris’ good nature, and the other relatable characters found in these pages.