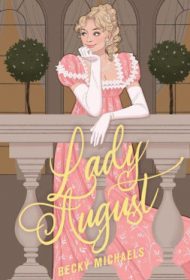 Becky Michaels ticks all the boxes in her second regency romance, Lady August, the story of a governess whose world is turned upside down when she learns she is the illegitimate daughter of an earl.

August Summer is shocked when a handsome solicitor, Samuel Brooks, arrives at her home in Bristol with the news that her father, a man whose identity she has never known, is Lord Bolton. On his deathbed, Bolton wishes to see August and introduce her to his family. He has also left her a small fortune in his will and is determined she will be launched into London society.

As August meets her new relations and prepares for life as a marriageable young woman of means, she’s drawn to Brooks. The attraction is mutual, but Brooks has sworn not to marry. When scandal threatens August’s prospects, will he step forward and save her reputation by marrying her? And if he does, what kind of marriage will they have?

August and Brooks are successful characters: engaging, strong-willed, and imperfect; both harbouring secrets that threaten their chances of finding happiness together. Michaels also includes an excellent range of secondary characters, bringing depth to the plot. August’s half-brother, the new Lord Bolton, is deep in debt and needs August’s inheritance. Her half-sister is being forced into a marriage, and Brooks’ mother is set on finding her son a match. Happily for August, she also has a charismatic, if scandalous aunt, to whom she can turn to for support and advice.

Regency purists may question some of the story’s premise—the easy acceptance of August Summer, governess, as Lady August, society debutante; or the fact that Brooks, a solicitor, is treated largely as a social equal by August’s family—but this will be easily overlooked by most readers, who will find themselves engrossed in the story.

Highly recommended for fans of Julia Quinn and the Bridgerton novels.