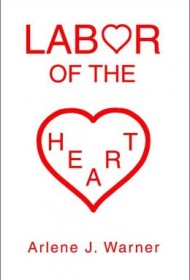 Arlene J. Warner has crafted a page-turning Christian romance in Labor of the Heart. Set in frontier America around the beginning of the 20th century, the story follows the life of a first-generation immigrant teenager and her relationships with fellow immigrants.

The main character, Katerina, meets a charming young man, Clem, on her passage from Italy to America. She doesn’t dare to dream that she’ll ever see him again, because he’s bound for Illinois while she’s en route with her family to Kansas. A chance encounter a few years later between the two sends butterflies to both of their stomachs.

An easy romance is not on the horizon, however, as myriad obstacles prevent the two from becoming a couple. For one, Katerina has promised herself to the convent. Since most people don’t know about this promise, Katerina finds herself in a sticky situation when another suitor, the brother of her best friend, wants to court her. Furthermore, God-fearing Katerina is unsure of the strength of Clem’s faith, especially when his family decides to run the town saloon. Other pretty local girls complicate the matter even more.

Multiple plot twists keep the reader engaged in this faith-based romance, while the inclusion of Italian terms, foods and customs lends further authenticity. A sweet side note is that the book is dedicated to Warner’s own grandparents, Clem and Katy. Since Warner’s book is so well-written and colorful, it deserves a better cover than the stark white background with title and author’s name in red letters. Readers who appreciate a values-filled Christian romance will enjoy this selection.