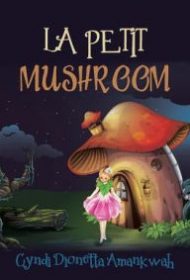 This children’s story concerns mortal mushrooms, a vengeful leopard, jealous wives of a king, violent combat, and the girl at the center of it all: “la petit mushroom.”

The action begins in Mmre krom (the mushroom kingdom) where Nana (King) Yeboah rules over the peaceful town of Amankwah krom. Despite the mushroom conceit, the characters are described with human qualities and behaviors.

When the king’s youngest and most beautiful wife, Maame Ama, gives birth to Sikadwa, a child with unusual pink stripes on her skin, people become suspicious of the mother. The townsfolk wonder whether the stripes were caused by Ama seeing a leopard while pregnant or from committing adultery. Soon afterward, Nana is poisoned, and Ama comes under suspicion again, especially from the other wives. She and her daughter are banished, and their adventure continues as Sikadwa grows into a lovely young lady who inspires two competing suitors.

The story’s reading level is unclear, as cover art and book length indicate an offering for young children, but lack of illustrations and inclusion of higher-level words (“They were interrogated separately; each denied knowledge of the accusation levelled against them”) confuse the target market. Also, references to polygamy and adultery seem misplaced in a story for children.

Errors in grammar, punctuation, tense, word usage, and repetition of words within a sentence also make this a challenging read, as does non-standard formatting, including short, one-paragraph chapters, overly long paragraphs within chapters, the word “dialogue” to announce some conversations, and awkward phrasing (“Besides this place isn’t conducive enough for my child”). Additionally, character and town names often begin with the same letter (Obofo Nam ye, Obofo Kofi, Okatakyie, Oheneba Bonsu, Obaa Panyin), making the story hard to follow.

Without aggressive editing for style and content, this children’s book (published in South Africa) may have difficulty finding international readers willing to overlook its flaws.