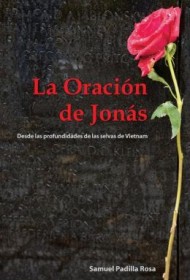 This novella draws parallels between the Bible’s Jonah, swallowed by the whale, and a man named Jonathan, swallowed by a transport plane that spit him out into the inferno that was the Vietnam War. Spanning from the ‘60s to 2011, the story includes numerous Biblical references that the author apparently believes predicted the terrorist acts of 9/11, especially Ezekiel, Chapter 9.

Author Samuel Padilla Rosa presents some skillful descriptions of Vietnam, which draw the reader into the horrors of that war (and any other, for that matter) as well as the aftereffects suffered by Jonathan. But unfortunately, there are poorly executed gaps in the story. For instance, in an attack by the Viet Cong, Jonathan witnesses the death of a soldier named Danny and suffers for it, but the reader only finds out at the end that they were childhood friends.

Ultimately, Jonathan appears in Times Square in 2011, where he witnesses the attack on the Twin Towers and draws all the Biblical parallels, but there is no mention about what happened to him during a 40-year period. If that information had been included, perhaps Jonathan and the other characters—who, as rendered, are mainly flat and clichéd—would have been more memorable and the book longer. In addition to spelling and grammatical errors, there are also historical inaccuracies, such as noting that John F. Kennedy was assassinated in Houston, and not Dallas, along with the misspelling of Martin Luther King’s name (“Marthin”) three times.

Author Samuel Padilla Rosa has chosen a topic compelling to many in the U.S.—one with a Christian-based message that might add to its appeal for some. But as is, the book needs reworking and a hands-on editor to help make it more engaging to readers.