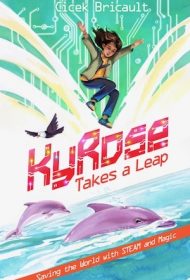 In Cicek Bricault’s middle-grade novel, a twelve-year-old girl desperate to become popular hides her unique ability, fearful of seeming like a freak.

KyRose dreams of joining her school’s in-crowd, which means making friends with Georgia, the “popular and ruthless” soccer captain. One day in gym class, KyRose makes a good play, and Georgia pushes her to serve as goalie for her soccer team. While psyched that she’s made points with Georgia, KyRose is also terrified: There’s a big game coming up, and the pressure is on.

Meanwhile, KyRose has all but shunned her best friend Cora who eschews popularity. Still, Cora and friend Will faithfully keep KyRose’s ability secret: She can talk to animals.

The story is set in the near-future. Astronauts will soon land on Mars, and there’s a global competition for students to build prototypes for devices they can use on the mission. On a class field trip to a rehabilitation sanctuary, KyRose visits an injured dolphin and learns that the once-plentiful mackerels are gone and a dolphin pod has inexplicably disappeared. KyRose devises a plan she thinks will win the competition— and the soccer championship, too.

The narrative sometimes falters with unnecessary scenes and stage-setting: “Mom reminds me to hurry. I change into my soccer uniform. My jersey is green. Everyone else on the team will be wearing yellow and black, but Coach Hartley said because I’m goalie, I have to stand out…”

Nevertheless, KyRose is a strong, sympathetic protagonist: She battles insecurity and struggles with friend issues and moral dilemmas. Supporting characters are original and well-defined, and the teens’ dialogue and behavior are dead-on.

Additionally, complex plot lines are skillfully managed; the dramatic windup is as thrilling as it is surprising; and the story carries a timely theme about the interconnectedness of all life and the importance of protecting our ecosystems and fellow creatures.

Although the story would benefit from editing, readers will be glued to the sidelines cheering for KyRose.