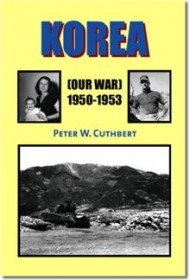 Proud of his military service during the Korean War and anxious for his descendants to understand his role in the fighting, Peter W. Cuthbert pieced together a memoir based on letters he and his beloved wife Nan sent each other, his own recall (which he admits is precarious), previous books about Korea, plus a variety of other sources. He worked on this memoir for about a decade, publishing the book in 2002.

Born in 1929, Cuthbert left college and ended up in a war-torn nation he had formerly known nothing about. The book is chatty (his letters often begin: “Hi Hon, how’s my Sweetheart?”), mixing accounts of day-to-day noncombat life in a foreign locale with frightening battle scenes. Both the letters home and Cuthbert’s narrative portray the gruesomeness of war, such as the killing of strangers and the frequent bouts of fear. Like so many others who have been to war, he also often mentions the brotherhood of the soldiers and the occasional good times when fear is absent. Photographs scattered throughout the text add useful information.

The book glorifies American soldiers as the primary defenders of liberty. Throughout, Cuthbert shares his opinions about the nature of courage and cowardice. Many readers are likely to find these opinions, particularly when they veer into political territory, objectionable. For example, he makes derogatory comments about U.S. President Bill Clinton (“Slick Willie”) and actress/civic activist Jane Fonda, while lionizing disgraced U.S. Senator Joseph McCarthy as a patriot.

The writing style of Korea is pedestrian and the text is in need of a thorough copyediting. Military jargon and abbreviations pepper the text (for example: “In the current static situation, the 89th Tank Bn. (Med) was quite a large outfit.”) In sum, readers will find decidedly mixed results here. The memoir is most effective when Cuthbert eschews sociopolitical commentary and focuses on his personal path to war and assimilation back into civilian life.