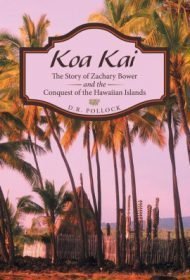 D.R. Pollock’s Koa Kai is a cleverly plotted historical novel that moves from New England in the early years of the American Republic to Hawaii’s first attempt at nationhood.

Zachary Bower is sent from a hardscrabble family farm in rural Connecticut to be further educated at the home of his aunt and her sea captain husband in a nearby port town. Already chagrined at being too young to be a hero of the American Revolution, he’s at first disappointed, but soon falls in love with Lizzie, the daughter of a straight-laced, narrow-minded pastor and, under the tutelage of his Uncle Israel, becomes enamored with seafaring life.

Soon, and to escape the wrath of Lizzie’s disapproving father, Zachary joins the crew of Israel’s barque, which sets off on a trading voyage to then Spanish-controlled California, where a mix-up soon finds him on the wrong ship and bound for Hawaii. There, natives bent on revenging killings perpetrated by previous Americans attack the vessel. Only Zachary and one shipmate survive by claiming to King Kamehameha that they are experts in Western weapons the Hawaiians have acquired.

Pollock then embarks on a detailed account of the people and culture, tracing the king’s attempt to create a single Kingdom of Hawaii. He also explores Zachary’s integration into island life. Now torn between worlds, Zachary longs for home—but which home?

Detailing a series of gripping nautical adventures, the novel is impressive in its sweep. The author exhibits skill in weaving disparate elements into a unified whole.

That said, technical issues distract. Commas are often missing, and occasionally, the dialogue reads like a screenplay (“Davis: ‘We may have done it lads…’ Young: ‘Our only hope is…’”). When written traditionally, the dialogue contains many unnecessary speech tags. (“Davis bellowed”; “Toby commanded”; “Billy snarled”). Finally, a few anachronisms are jarring (“Cut those frickin’ boats loose”).

Despite these issues, readers will find a plot with plenty of twists and turns to keep them engaged.