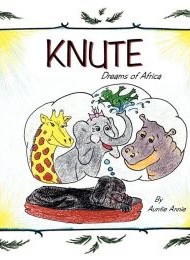 Most readers won’t ever have the opportunity, as children or adults, to safari in Africa and get a sense of the land and the animals up close. Auntie Annie’s book Knute: Dreams of Africa offers a fun, imaginary link between seeing African animals in the nearest zoo and seeing them in their natural habitat.

Knute, the star of Knute: Dreams of Africa, is a black Labrador retriever who travels to Africa with his swan friends Delbert and Dalyla, plus Jiffy (a squirrel) and Douglas (a frog). The trip is just a dream, which is known from the beginning of the story. We’re also reminded several times in the book, with lines like:
“He met new friends/in his dream/Oh, how real a/dream can seem” [sic]

The writing works well, despite the occasional forced rhyme. Stranger is the come-and-go nature of the punctuation, with question marks and exclamation points making regular appearances, but only one period in the entire book. Still, Auntie Annie (we’re told on the back cover that Auntie Annie is Annie Wingert) typically sets off her stanzas with spacing, so although unusual, the lack of periods doesn’t greatly inhibit the reading experience.

The drawings are colored in crayon, which can often look muddy in glossy-paged books, but here they mostly succeed. Except for the anthropomorphic cartoon look of their faces, the animals are mostly drawn realistically, with the notable exception of Douglas the frog, who inexplicably sports two buck teeth.

There’s a bit of a scare for young children (and some excitement for older ones) as Knute’s dream ends with a crocodile apparently having eaten Douglas. Luckily, it’s only a couple of pages until Knute wakes up and finds his froggy friend alive and well. Overall, Knute: Dreams of Africa makes for a pleasant armchair tour of the continent.