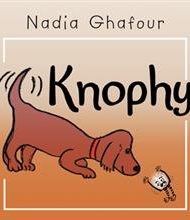 A bit of fluff is the central character in Nadia Ghafour’s sweet but flawed children’s picture book Knophy.

Knophy, who looks like dandelion fluff, goes through life unnoticed by everyone, despite his best efforts. He finally gives up trying to be seen and focuses on himself, enjoying being be blown about by the breeze inside the house he occupies. After close calls with a hot teacup and a fireplace, he enjoys floating up and down until he’s caught in the hands of a little girl who actually sees him, prompting Knophy to finally feel validated.

The art in Knophy is competent but does little to distinguish itself. Knophy is cute and there’s an excellent drawing of the little girl, but the images are largely simple and repetitive. Additionally, the writing sometimes lacks necessary transitions. For example, when Knophy encounters a dog, Ghafour writes: “He thought the dog was finally seeing him. Knophy looked behind him and saw there was a speck of chocolate on the floor!” A simple “but” linking these ideas would have helped clarify what was happening.

The biggest problem with Knophy, though, is its message. After the dog encounter, Knophy decides he will “no longer waste time trying to reach out to people and animals.” Instead, he “would start living his life doing the things he loved to do best and stop being afraid of being himself.”  This seems to be a climactic moment, offering a moral that celebrates the self. But it’s followed by the girl finally noticing Knophy—to his great delight. “Hurray…I exist, I am alive and I am me…” he happily shouts. This muddles the message: Should a person feel validated by just being him/herself? Or do we need recognition from others to feel good about ourselves?

The author seems confused about her ultimate point. While the idea of learning to appreciate one’s individuality has promise, some revision is needed for this story to speak to young readers.