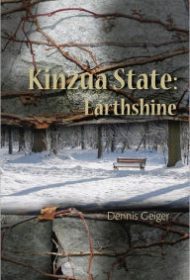 Licensed psychologist-turned-writer Dennis Geiger, who worked more than 30 years with seriously mentally ill patients, undertakes the time-honored goal to “write what you know” in his book, Kinzua State: Earthshine. The novel centers on Dr. Masonheimer, a psychologist who works with the mentally ill at a fictional hospital located in a small Pennsylvania town.

This psychological novel could best be described as a collection of snapshots of hospital life occurring in winter, 2004. Each chapter comprises an average length of four pages. Other than three slim story lines (a marriage between inmates, an escaped patient hiding in the basement, and a doctor/drug dealer), the bulk of the content consists of a series of encounters between Dr. Masonheimer and Kinzua State’s patients, staff and administrators.

While Geiger delivers meticulous, creative descriptions of the ongoing parade of characters (their faces, wardrobes, hairstyles, etc.), most of them mean little, if anything, to the story. Additionally, the patients’ sessions are often overly long, strangers deliver three-page monologues, and the author includes other unnecessary information.

Meanwhile, Geiger’s main character fails to compel. He seems dim (he walks outside with patients three different times in winter, always forgetting to dress warmly); unaware (he’s frequently shocked by patients’ realizations and clueless about another long-time patient’s traumatic history); and lacks empathy (he reacts to a colleague’s suicide with fury, considering it a personal betrayal). One wonders what might have resulted if the author had instead focused on such characters as the hard-bitten, transvestite-cum-motorcycle gang member.or the scent-centric colleague who never met an aroma he didn’t love.

Day-to-day life in psychiatric hospitals is a never-ending source of fascination. While this novel disappoints, hopefully Geiger can focus his next work more sharply. If so, he will find that the material has widespread appeal.